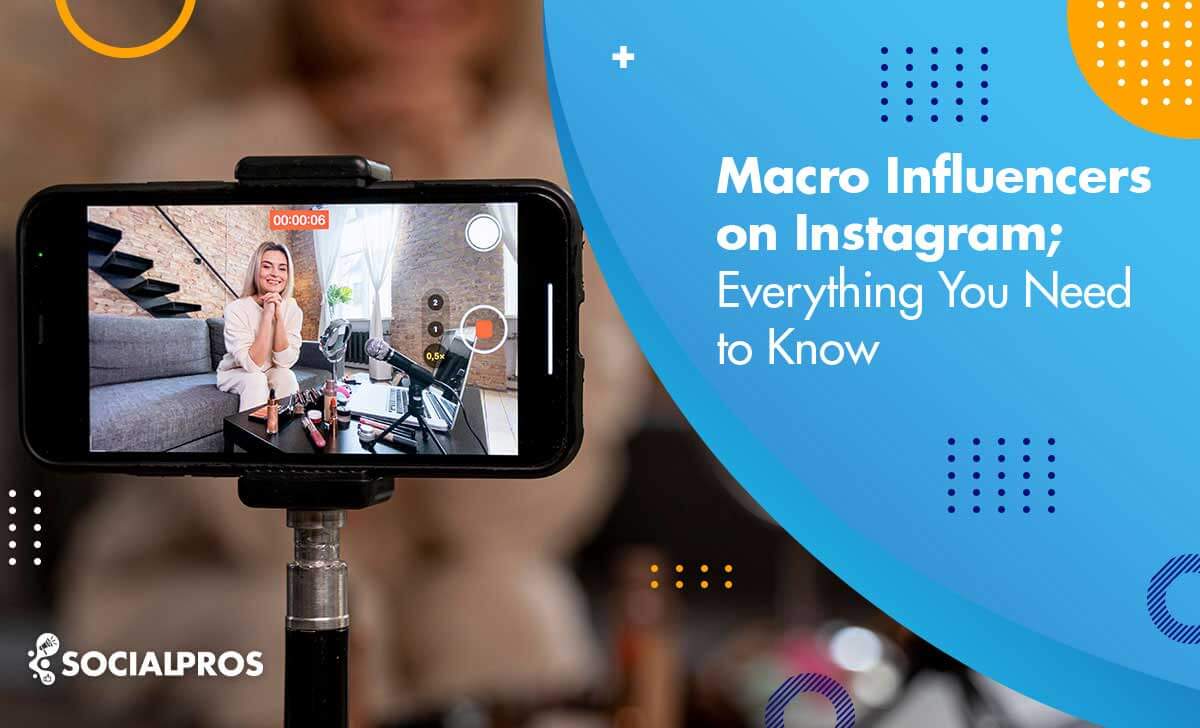 Using macro influencers to promote your business on social media is very effective, and here’s how.

Social media influencers are not only famous figures on Instagram but are also important for businesses to reach more audiences.

What’s more, macro influencers have a big stage on their page because of the number of their followers.

But how can we reach out to macro influencers?

Continue reading to understand macro influencers’ definitions and how you can use their influence to gain more followers and generate more leads.

To grow the number of your followers, fans, and potential customers, Instagram is a great platform to invest in.

That said, it’s not that easy to be recognized on Instagram single-handedly. That’s why you need Instagram Influencers to put you on the radar.

And by using influencers you will experience significant growth.

What Is A Macro Influencer

Also, their engagement rate is at least higher than 3%.

The average macro influencer is somewhere between a micro and a mega influencer.

They regularly produce content and have a large audience that trusts them.

If you want to run a great influencer marketing campaign you should have enough information about all types of Instagram influencers. So, let’s take a look at the difference between nano, micro, macro, and mega influencers.

As shown in the image above, influencers with less than 10K followers are nano influencers. They are good for collaborations with local or small businesses because they are friendly and have the most targeted audience.

Next, micro-influencers are well-known in some specific niches. They have 10K to 100K followers. Actually, they have a good engagement rate too.

As we said earlier about macro influencers, they have between 100K to 1M followers with an engagement rate at least higher than 3%. They are good for brands that need to reach a larger audience compared to local ones.

Last but not least, mega influencers are the most expensive influencers with over 1M followers.

Moving on, let’s dig deeper and learn more about Influencers vs celebrities.

Although there is often a fine line between a celebrity and an influencer, celebrity influencers are mainly followed by people who are a fan of their music, movie, or performance.

The Difference Between Micro and Macro Influencers

Should Your Brand Leverage a Macro Influencer

All in all, working with macro influencers, depending on the size of your business, is so beneficial that you can’t ignore it.

However, there are different factors to consider before you contact one, say, their niche, location, etc. Here is a quick checklist of things to run through:

First and foremost, you should make sure the influencer you choose has the exact niche as yours.

Secondly, you should keep in mind that there are many Instagram accounts out there, claiming to be an influencer worthy of collaboration. But, they won’t be able to help you boost your engagement unless they themselves have a high engagement rate.

Another thing that plays a major role in the successful collaboration is professionalism. By professionalism, we mean an influencer should not only create professionally designed content marketing methods for your business but also make sure to meet deadlines and perform as agreed in their contracts.

How to Choose the Right Macro Influencer

First of all, you should determine your target. You have to know what you want from your influencer. It is the only way to evaluate the success of your campaign, whether it is to increase your brand awareness, boost sales, or anything else.

There are different types of influencers with different niches. So, you ought to choose the right type of influencer who has the same niche as yours based on your target, budget, and business size.

The best solution is to use a reliable Instagram marketplace like Ainfluencer because they guarantee you will be linked to the right person and they will fulfill their contract so you won’t lose a penny you’ve spent.

With the advanced search feature of Ainfluencer you will find out different types of influencers and you can target them to find the best based on the following filters:

So, you can find the best influencers match to your business.

On Ainfluencer, you may create descriptive advertising about your campaign goals, research top macro influencers in your field, and invite them to collaborate with you.

Watch this video to learn more about working on the Ainfluencer dashboard.

Before launching an influencer marketing campaign, a brand must first determine who to collaborate with.

You must consider variables such as following and followers count, audience demographics, followers’ quality, typical content, and prospective reach among others.

Let’s get to know some of the macro influencers now:

Dr. Jackie Walters is an obstetrician-gynecologist who was born in Mississippi in 1958. She also appears on Bravo’s TV show ‘Married to Medicine.’

Jackie rose to prominence after surviving breast cancer by founding the 50 Shades of Pink Foundation. Her Instagram has over 1M followers and a great engagement rate.

Dr. Jackie’s point of V discusses feminine health and offers her personal experiences and recommendations on her Instagram account as well as her podcasts.

If your company is in the healthcare industry, she could be an excellent macro influencer with whom to partner.

She is an American yoga influencer, born in 1987. She became well-known for her strength, flexibility, and distinct teaching style.

Ashley is one of the most famous macro influencers on Instagram. She has been viral for lots of fitness and yoga training.

Also, she provides all the things related to yoga and fitness on her Instagram business account. So, if she is a good option for your brand you can ask her to advertise for you.

She is an active personality in the fashion sector with approximately 788k followers on her Instagram account, making her an appealing collaborator for many brands in the same field.

Next, the top Instagram macro influencer is Alison Wu with a high engagement rate. She is a wellness influencer who posts on her Instagram about healthy eating, self-care, and physical and mental well-being.

With her 148k followers, she also discusses veganism and promotes healthy recipes. So, if your brand is related to wellness, she is an excellent pick for an Instagram influencer marketing campaign.

She is an American actress born in 1998. She has been famous since 2013. Moreover, she has 920K followers on her business account.

Also, she has another business account,  twelvethreethirty, where she uploads her training exercises.

Lauren Giraldo is very active in many filed, and she is a good brand ambassador.

The amazing thing is that Instagram macro influencers are not only humans. Jill The Squirrel is a macro animal influencer account.

There’s a lot going on in the world, and people need to unwind. Jill the Squirrel, for example, is a macro animal influencer.

Jill the Squirrel, a seven-year-old squirrel who was rescued from Hurricane Isaac, has 270K Instagram followers under the handle this girl is a squirrel.

Isabella is a lifestyle and travel macro influencer.

How Much Do Macro Influencers Make

According to Mediakix, here you can see the estimated amount of each sponsored post for each type of Instagram influencer. So, you can choose better:

Challenges Of Working With Macro Influencers

Credibility: You should be sure about the credibility of the influencer you want to cooperate with.

If the users don’t trust that influencer they don’t trust any of the brands they promote.

Cost: Macro influencers are usually well-known on social media. So, they may have lots of different offers. They may also be signed to influencer agencies which cause high fees for partnership.

Let’s read the short questions and answers that people also have about macro influencers.

Q1. What Is The Macro Influencer?

Those influencers with over 100K to 1M followers with high engagement rates are macro influencers.

Q2. What Is the Difference Between Micro and Macro Influencers?

Q3. How Much Does Macro Influencer Make?

Furthermore, you are familiar with the Ainfluencer Instagram marketplace to make a deal with influencers.

If you are looking for the best and most relevant macro influencers, don’t miss any more time, and sign up on Ainfluencer now.